Can USB Storage connected to router serve as MM's Mediaserver?

Report bugs & feature requests for MediaMonkey Server and learn about the newest builds.

Can USB Storage connected to router serve as MM's Mediaserver?

I've been trying for months off and on to get the following to work but I'm just too much of a beginner to understand the whole concept.

I have a WD Elements HDD connected to a FRITZ!Box router via USB. I've been calling it a NAS for the longest time but what I'm starting to understand is that this is not a proper NAS? But I'll call it NAS for now to keep clear which source I'm referring to (and it's short to write).

My ultimate goal is to be able to use MMA to play my songs from the NAS. It works, but only as long as I have the service running on my PC and that defeats the purpose. The only thing that I seem to need to get this all to work is the service bit, is that right?
How can I keep the service running even if my PC is off? Can I install it on the NAS? I have no idea how. Could somebody help with this?

As a side note: The FRITZ!Box does come with its own mediaserver software and that works too, MMA can find it easily. Unfortunately that Mediaserver looks to be rudimentary, it makes a mess of some the tags (Genre), and most aren't even showing. It's not ideal, I hope there is a way that I can do this with MM itself.
Top

MediaMonkey (for Windows (MMW)) can't be installed on a NAS (only on Windows). However they're working on MediaMonkey Server which can run on a NAS (there are QNAP and Synology Apps as far as I know). I don't know what Friztbox runs for Apps and what their eco system is: https://www.mediamonkey.com/forum/viewforum.php?f=31
Lowlander (MediaMonkey user since 2003)
Top

I didn't get a notification of your post. Only seeing it now.

But thank you so much for the response. It confirms what I started to think already, that what I was trying is not possible (the installing of the service on the NAS directly). Saves me time and hairs now that I know I can stop trying to make it work.

I had looked at the server bit, yes. I tried.

I ran into two issues during the install of MMS. The first one was that it couldn't find my Music and Video libraries, it assumes they're under \Users? But I moved mine to a different drive.
Just as a test I made the folders where it was looking for them and it went through this time but right after gave me a 500 error. And that's how far I got. I may look into that more at some point.

But hopefully you can do something with this info.

In any case, thanks as always, Lowlander. Maybe best bet for me would be to get a proper NAS like a Synology.
Top

Or maybe something like a windows-rasperry just for the installation, and keep the fritzbox for the share/files?
MMW 5.0.1.2412 on Windows 2016 Std.
MMA Pro on Android 10 Phone and Android 11 Tab
MP3Tag, MP3Diags, IrfanView
Top

Or maybe something like a windows-rasperry just for the installation, and keep the fritzbox for the share/files?

This could work, also an older PC (most of of have at least one) with some memory (8GB min is recomended) and HDD upgrades can work as NAS to share files and also act as DLNA server. Check TRUENAS

Using routers usually is not recommended for heavy lifting and large multi user/devices share. CPU and resources are too much under powered. Maybe if someone pick up MMS can be compiled in package for TrueNAS unless you want to do manual install that should work also.
Best regards,
Peke
MediaMonkey Team lead QA/Tech Support guru
Admin of Free MediaMonkey addon Site HappyMonkeying

Oh that sounds all interesting too. I would not have considered those options cause I never heard of either of them.
------------------------------------
I had to look up info on RPi to understand what it does. What I gathered so far is that it has its own OS, but since MM needs Windows I need to install a Windows version on there. But I don't know which one you're referring to.

There's an official IoT 'lite' version from MS which looks straightforward enough to install but seems to come with some drawbacks, is that correct? Like not having Wi-Fi. And the network port cannot be used either I read somewhere, that needs to go through a USB port. Nevertheless, if there's no other drawbacks then this might work.

Otherwise there's also an unofficial Windows on Raspberry (WoR) version. Drawback of this is that the install is more complicated and it's unofficial/unsupported. Concerning that, will Windows ask me for a registration number after I installed it?

This is where my knowledge of NAS and mediaservers falls short, cause that's my idea of it: that it only needs the MMW service to always run so my phone can find it anytime. Could it be that simple to setup? Or will I run into problems if it does not have NAS features. When I for instance want to save playlists or other things (I'm just picking something, I have no idea).
------------------------------------
Please correct me if I got anything wrong and then I can go from there. This already helped me a lot. Thank you both!

Summary (as I understand it)
- USB-attached HDD to router: can't install the service needed like that. Not an option.

- A router's Mediaserver not always viable cause of too may resources getting drawn. Also, not 1:1 compatible with MM as in the case of the FritzBox for instance.

- Raspberry Pi 400 sounds like a good and cheap option, and it's small. Needs a Windows install though, which one, I'm not sure. No RAID.

- Old PC, if it can be without TrueNAS then it sounds the easiest to get up and running. A PC is bulky though and draws a bit more power than probably is justifiable for the amount of usage it's gonna get. A plus is that you can replace/add components and get RAID. Cause it's cheap and easy (in comparison) it's a good starting point.

- Old PC with TrueNAS (and MMS). Same pros and cons as above + will be harder to install I'm guessing. Needs fair amount of knowledge to setup. Maybe OP for my usage.

- a (Synology) NAS's purpose is tailor-made for this kind of usage. Small, and with the right model, RAID is built-in. Very easy to setup I suppose? Only con that I know of: it's pricey. This would be first choice for most people I think if price is not an object.
Top

Hi,
HDD in FritzBox should be easy to setup https://www.youtube.com/watch?v=2gxoeSou54g and https://www.youtube.com/watch?v=TAQyZl4eydc and Active HDD/USB HUB with own Power Adapter that do not power from FritzBox. after that any PC with MM installed can access it and once scanned on one PC you can share that initial MM Library to others and save time.

Point Of having TrueNAS is to have low power PC sharing HDDs to network, essentially NAS devices (Synology, QNAP, ... Excluding some even they clain it is NAS) are exactly the same thing but better optimized and customized. You do not have Windows, but custom Linux distro. and as you do not use GPU, but Access device over WEB browser to setup power drawn on a regular PC is not that high. With raspberry you would still need to have external HDD Media so that cost also and you come up on same power usage liek normal PC.

@Peke, The links you gave for the vids is exactly how I had set it up. And it's working great, the library is on the NAS and all the phones that have MMA can find the music on there.

But... only for as long as I have my PC on, cause that's where the MMW service is running from. If the PC is off then my phone cannot get a connection via UPnP.

That's where the crux is, what you mention too: the power it draws. I don't want my gaming rig on all the time just for my phone to have access to the library (that's the only PC I can use at the moment).
That's why I was trying to get the service running from the 'NAS' (USB HDD) itself, fruitlessly I know now

.
It would've been sweet though, cause it would not take up any more power or any other devices then are already in use.

So, I'm glad for the extra info you gave. For instance, I figured up to now that a Raspberry Pi would be way less power hungry than a whole PC, but you say the difference is not that big and if TrueNAS is not as hard as I thought to setup then it could be a good way to go, having RAID possibilities would be nice for one. And as you say, it doesn't need a dedicated GPU.

I know now what viable options there are. It's been a big help. Thank you very much.
Top

Hi,
It was my pleasure. Running cut down Windows 10 with MM always ON on Integrated Motherboard with APU should give you enough power to work with and if you put it near TV, make sort of Passive/Ultra Silent cooling you can always Remotely Access it and play movie or something on TV. SEE Below. 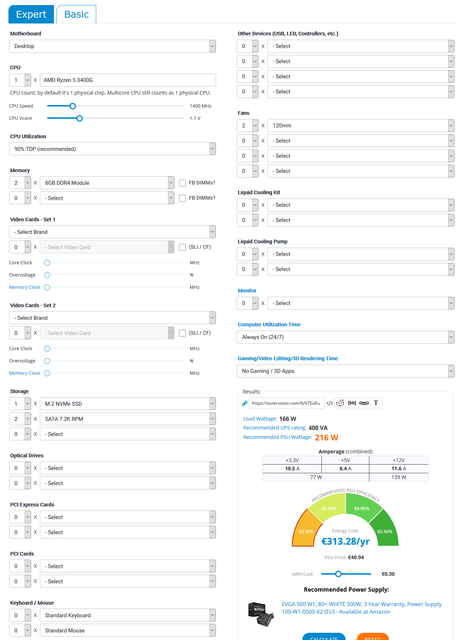