1) After starting up Android Auto for the first time due to just having plugged into the car, when I switch into MediaMonkey on the head unit there is no meta data whatsoever, similar to the previous bug. Once I change tracks the meta data then starts being loaded correctly. Not a huge issue

2) Once in a blue moon when booting up AA on my head unit and going into MMA, the now playing shortcut in the tray is gone and replaced with the downvote button. Obviously that's just a coincidence and is more of a matter that if any button is gone one will be pulled out of the 3 dots "more menu" since that's how android handles toolbars.

I think it happens if I haven't used MediaMonkey on my phone for a long time and then plug the phone into my car, so that Android Auto has to launch the process itself. The Now Playing button doesn't appear just when I start playing, but does reappear after I start playing AND switch the head unit focus to some other AA page and then back to MediaMonkey.

You can see this in the same image I used to show the previous bug in which artwork was missing under the "Resolved" section.

1) It would be nice if there was an option to display a few bits of additional info for the current track, like genre, or at least a button to get to that info like properties option within regular MMA. It could be added within the 'more' button on AA next to the rate and shuffle/loop buttons.

2) Tiny issue. No way to rate songs with half-star precision. Not a big deal since ratings songs while driving is of minimal importance, but I just figured I'd throw it out there since I make heavy use of half-star ratings. So, if I ever did feel like changing a rating while stopped or something, I'd most likely have to pull out my phone.

1) Its impossible to search for songs with weird names (common in EDM). For example, no matter how many ways I try to pronounce it differently, assistant always thinks I'm saying "Iowa" instead of the desired "Aiwa". I know this is more of an assistant issue, but perhaps at some point it would be possible to add an option to spell out a track name (if assistant allows this kind of Intent). I know voice search optimization is already a consideration for 2.0. While I understand that fixing this is more Google's responsibility, it is such a MASSIVE headache that in the meantime it would be cool if this could somehow be improved via different search mechanics on the MMA side of things (such as in 2.0).

1) Not sure if its something with my library, but the "Artist" list on AA never loads, just shows the loading circle infinitely. Currently I have 1041 Artists. All other views load in a second or two, including "Albums", of which I have 985 (1000+ issue perhaps? I saw something on the forums with a greater than 500 problem)

It takes a while to load but it does now seem that the artist view loads in AA for me.

[color=#]4)[/color] This may be a bug with Android Auto, but it also could be that AA handles this automatically yet MM acts thinking it isn't handled automatically and therefore cancels out the effect. Often when I receive or make a phone call when the call ends the music automatically starts playing again only for it to pause itself less than a second later.

1) No artwork is shown when the app is full screen on the head unit, its just black. Artwork does work in the mini-view when you're on the home screen of AA. You guys are already aware of this, just figured I'd reiterate it here. Picture is awkward since my phone needed to be plugged into the car.

Pure limitation of AA, doesn't make sense to show tracks when only 12 or so could be seen:

1) This may not be a bug and just another safety thing that you can't change, I'm not sure. Anyway, when you select the "Tracks" view, it only gives the option to "Play" or "Play (shuffle)" and doesn't actually show any of the tracks.

Finally confirmed this is an AA issue as it also happens with VLC. Very annoying :/

5) Similar to a previous issue on MMA, the artwork showed on the head unit is sometimes incorrect and inconsistent with what is shown in the player on the phone itself. In this example the artwork wasn't even from a previous track or another song in the playlist, it was completely wrong: 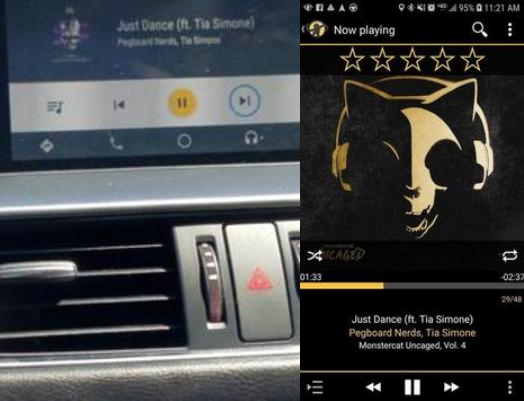 There is no correlation between the wrong and correct artwork. Will test if this happens with other media players ASAP, and get more logs of this when I can (hard since its while I'm driving). Like the issue of the "Now Playing" button not being present, if I change app focus on the head unit and then go back to MediaMonkey the artwork will change to the correct artwork; in fact, sometimes you can see it happening if you watch close enough, though other times the artwork is already correct right when the MediaMonkey view pops in.

Was aware you were tracking the first one, was not aware of the second. Though, do you believe the same bug to be at fault for the second? Since I have over 500 albums yet that loads fine. Someone in that thread mentioned having double digit thousands so I will guess thats a yes.
Top

8. should be handled with https://www.ventismedia.com/mantis/view.php?id=15261 as Android Oreo/Pie changed behavior on system level and MMA gets confused Can you try to replicate with 845?
Best regards,
Peke
MediaMonkey Team lead QA/Tech Support guru
Admin of Free MediaMonkey addon Site HappyMonkeying

Peke wrote: ↑Wed Jan 30, 2019 7:01 pm 8. should be handled with https://www.ventismedia.com/mantis/view.php?id=15261 as Android Oreo/Pie changed behavior on system level and MMA gets confused Can you try to replicate with 845?

Is there a repo I can use to easily roll back to 845 or did you mean something else?
Top

Marked issues 1 and 1b as solved. No strikethrough available so I used quotes instead.
Top

You mean the issues other than 1 and 1b? I will certainly go through them all. I'm pretty sure the artist plane not loading is still an issue. Will test each next time I'm in the car, and will work on getting logs for the remaining issues.
Top

Do you mean play songs on android auto via another media player and see if the issue with the albumn art occurs there as well?
Top

Hi,
Yes exactly. I tried to replicate on my phones and Car HeadUnit (Android Based) and had no issues with Album Art showing, I am guessing the problem may arise when AA is sent to display as in teh past common issue for that is Album Art format support where PC and some Devices allowed even GIF along with high res PNG and JPG while others do not allow them and limit to 500x500 or less.
Best regards,
Peke
MediaMonkey Team lead QA/Tech Support guru
Admin of Free MediaMonkey addon Site HappyMonkeying

I have issue 2 as well, either connected to the car or just launching media monkey through android auto app sat in my flat, choose artist or Album and you just get a spinning yellow ring.
Top
Post Reply
19 posts