As we get closer to releasing MM5, we're looking for ideas for the MM5 icon. The current (temporary) MM5 icon is at: 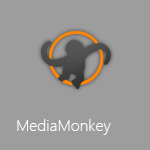 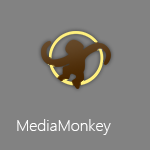 I like drakinite's suggestions because unlike the current temporary MM5 icons, it's easier to differentiate the monkey from the circle and it adds a some color. However, it could be improved if it were perfectly square (the horizontally wider arms force the icon's overall size to be smaller--this was any issue with the MM4 icon as well).

Any thoughts? Other suggestions?

Thank you so much, I'm so glad to hear you like my suggestions!
I actually just posted a thread about my improved suggestions for the icon,

, It's here: viewtopic.php?f=30&t=96899
In short, I think allowing the logo's colors to change depending on the skin being used could be fantastic for UX. Also, it would make sense for the default skin's icon to be the icon for the branding.

But even if that doesn't happen, maybe the black-and-orange logo could be nice. I made sure the contrast of the shapes (monkey and circle) were very high, so that it looks good when shrunk. Granted, it isn't square, but I think the simpler details (and increased contrast) allows it to be more recognizable when it's small. 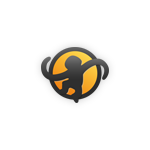 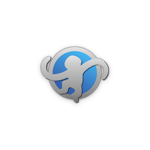 Love the new icons as well!

The one thing I liked about your previous suggestions (with the orange and yellow circles) was how the hands/legs were different colors than the circle allowing for a 'flatter' icon by reducing the need for shading/shadows. What do you think about a version of the latest icon that has a slightly different colored circle?

So, the problem I have with making the outline colors too flat is that it won't stand out against different backgrounds. (If our monkey boy is, for example, a solid dark gray, he will blend in with a dark background; and vice versa if he's light.) We could get around that by surrounding him with a colored shape, like for example the Discord logo. At the risk of looking like we're copying VLC and Google Play Music, I came up with this li'l guy:
Edit: Added a blue version, too, if interested! 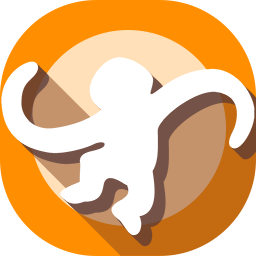 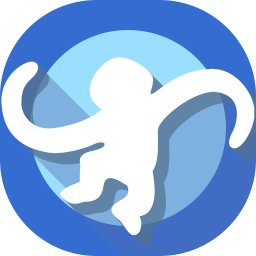 It's kind of a drastic change, and it's a bit of a risk to look "generic", but... it's kind of grown on me? And it does kinda look like it would fit as an Android app logo.

Back on Earth, however, here are some modifications to the first icon suggestion; I made the monkey brighter and the circle darker, and also made one with no outline and one with an orange outline. 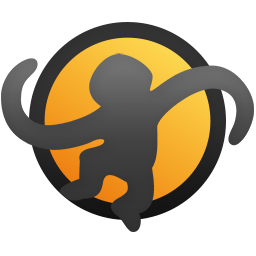 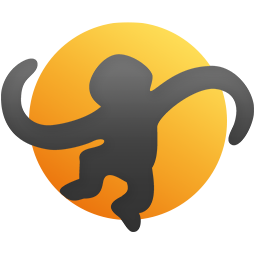 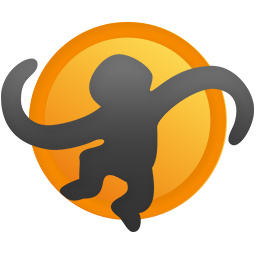 Personally... I'm not the biggest fan of any of these; The first and third don't really feel right, and although the one in the middle looks pretty good, it kinda looks like it's a shadow of a monkey dancing in front of the sun. Gives me "tropical" vibes, as if it's the logo of a beer company.

Somehow, I keep getting drawn back to the first two. 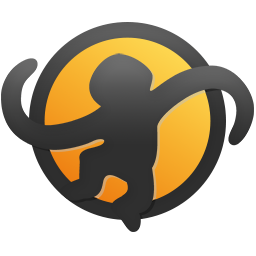 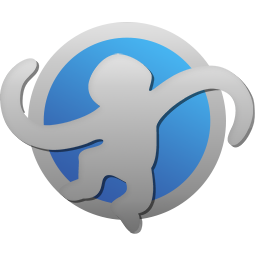 What do you think? Maybe I could try making much more subtle brightness changes to the monkey/circle, to make it not as jarring but still help them differentiate a little better?
Thanks again for listening to my input, it really means a lot that you'd consider my ideas. MediaMonkey is by far my favorite music library program, and it makes me really happy to take a part in it.

I showed the new ones to my artist friend, and she suggested that I remove the long shadow, and improve the contrast, since they were pretty muddy when they were small.
I think this might be a more viable as an actual icon, since it's much simpler, flatter, and has better visibility when shrunk down. 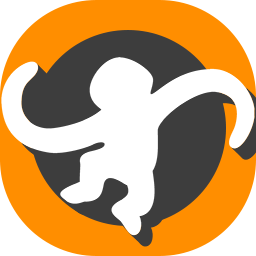 Also, in theory, having only 3 colors would allow for easier recoloring; though I had some difficulty getting good contrast out of Monkey Groove's colors. But by adding Material Light's hot pink, this makes a pretty fun neon logo. 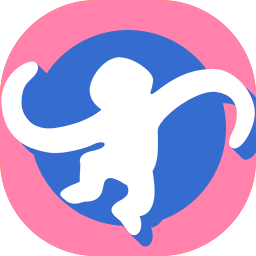 It's more or less a proof of concept, but I'm looking forward to hearing your feedback!

The most frequent time that I see the MM icon is on the taskbar. I have the taskbar set to tiny icons, so it is only 16x16 probably. So there is not much for an artist to work with. Most important to me is that is a distinctive colour set, and be reasonably crisp looking. ... My view is that a choice of icon should work backwards from that basic requirement.

I agree with your comment about the undesirability of "MediaMonkey 5" forcing two lines lines on a shortcut. I have relabelled mine to MM5.

fwiiw I liked these most from what you have offered.

btw: probably not helpful, but in another thread, a long time ago, I suggested that the Monkey could break the circle at the 5 position (clockwise).
Top

I do like the icons and the great efforts - well done

With the default taskbar color in windows 10 being black and 95% of my clients never change it (I fix computers for people) the black ring on the outside and the arms of the monkey would be almost invisible (which is what the MM4 icon looks like on my PC) - so the thoughts of using different colors would make it easier to see. Personally I also use 16 x 16 but most people prefer 32 x 32.

Keep up the great work

Thanks for the input, guys!

I do think that allowing the logo to stand out against a black background is really important, definitely. It's a tough balancing game, because something that looks good on a black background might not look good on a light background.
That's why I tried some versions where the monkey is surrounded by a brightly colored shape— though from the feedback I got, it seems like it's not the greatest. I could try iterating it a little more, to see if it can turn into a more viable icon, though.

Love them all, but I also prefer the original ones, this one in particular:

My concerns:
1) is it sufficiently different from MM4 (for users who have both versions running)
2) contrast on a black background (see below)

Maybe have the MM5 icon as a mirror image of the logo - left arm pointing down & right upwards?

I do believe that it is sufficiently different from MM4! 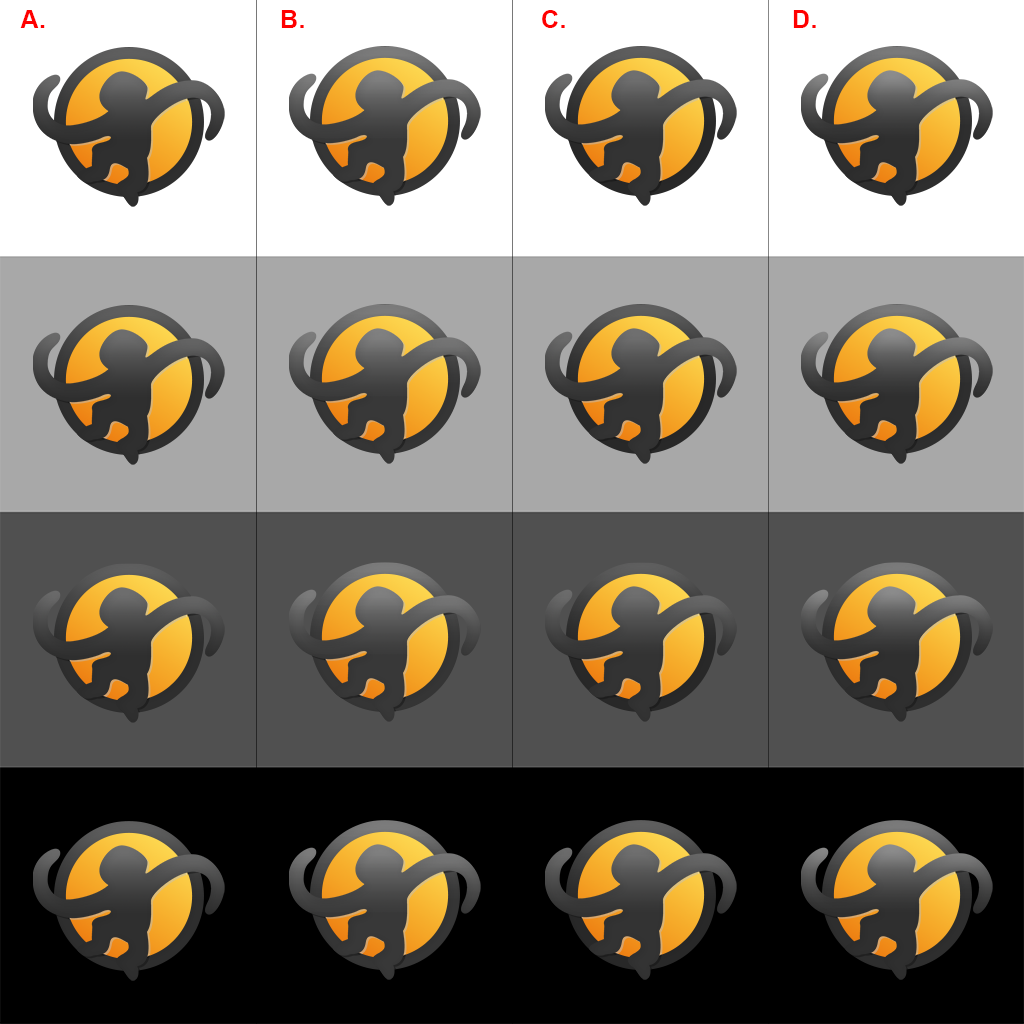 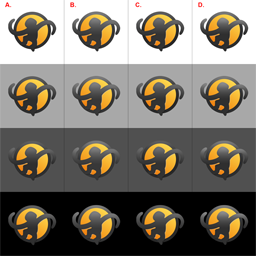 I won't share my own opinion yet on which is which, and which I prefer. I'd like to hear from you guys what you think is best. Thanks!

B and D stand out the best in dark backgrounds.
I can't really tell much difference between the two through my eyes.

But I am not too sure if others will feel that there is enough difference from MM4.
Top

I like them all from that selection, and have no strong preference. I would be happy with any of them.

I do have concern re MM4 vs MM5 on the taskbar, if that is important. It has been relatively important during beta testing when MM5 was frequently crashing and causing Windows instability, but should be behind us soon,

Your "shrunk" versions are not small enough to tell how it will look. See here is my taskbar.
My taskbar is set like this.
Top

My bad. Here are two versions of the sheet that's resized to make the icons 16x16.

This one was resized to be sharper:

This one was resized to be smoother:

I'm not entirely certain if the sharper version is completely representative of what it would look like when the actual icon is resized to be small; because Photoshop sharpened the image including the background; however, the sharper one does look a bit better.

Rusty, what do you think about it? Maybe we could make the icon more orange, or I could tweak the shapes/contrast a bit, if you think it looks too similar to MM4.