If you want to contribute MediaMonkey skins, themes, icons, etc...

i really like this widget it have a nice layout and gives you the possibility to hear and share Music with other Opera unite users ,so i try to convert this skin style to Media Monkey. 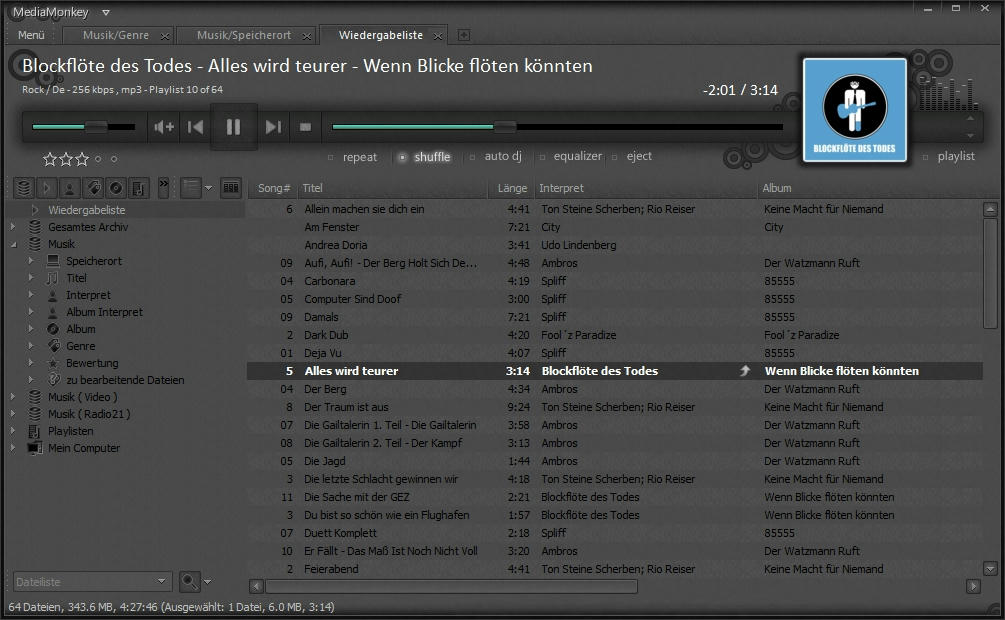 Note:
if you have any ideas for this skin let me know.

tree fonts are too dark as a matter of fact i can't see any text there.

I really like the looks of this skin. It has a lot of potential.

Enjoy your time away!
Thanks for the beta version to chew on while you are away.

EDIT: I just installed the beta version of this skin and I am very impressed. It is very very polished. MediaMonkey should consider adding Vision or UMP as the default skin. You and Eyal really have a knack for producing beautiful dark skins. Thank you. I'll try to give some constructive feedback on the beta.
Last edited by gpzbc on Mon Jun 21, 2010 10:52 pm, edited 1 time in total.
--
The gpzbc
Top

Oh boy is this nice! Thank-you, and enjoy your Summer!

I created a lyrics viewer theme based on this skin for myself.
if you want to use it, too, get it here
http://www.mediafire.com/?0yrnt5zmknc
Top

I think Id allso prefer a maybe white font or something at least lighter then black.
Top

UPDATE: The more I use this skin, the more I like the black text on the dark background. It is just so sleek. However, not all of my text is black. The "Album Art with Details" view uses white text for my library. And the black text in the folder tree and now playing list look much better.

UPDATE 2: That's weird. I just switched to plain "Details" view, and noticed that the text was black. Then I switched back to "Album Art with Details" view and the text is now black too!

That's great, but I'm not sure what is going on.

UPDATE 3: I just minimzed MM to the mini-player and the library text in "Album Art with Details" view reverted back to white text. I think I may have found a bug.
Last edited by gpzbc on Thu Jun 24, 2010 1:32 am, edited 7 times in total.
--
The gpzbc
Top

Seems like your monitors are too dark because I have no problems reading the text. I really like the dark text on the grey background.
@DreadM:
If you choose to use a lighter color for the text, please make two versions. One with dark text and one with light text.

Edit:
btw I also created a MonkeyRok theme based on this theme. If you want it, just tell me.
Top

Im in for the monkeyrok skin paku.

I just saw your screenshot in the gallery thread.
And I really like it.
Seven Ultimate X64 SP1 / Sansa Clip 2go (with RockBox)
Top

Looks like it's a bit controvers ,you can be sure i test it on my 24 inch monitor without problems ,also in the last days on my eee PC ,who got from natural not so bright monitor ,but i can read the text without problems,


gpzbc wrote:UPDATE 2: That's weird. I just switched to plain "Details" view, and noticed that the text was black. Then I switched back to "Album Art with Details" view and the text is now black too! That's great, but I'm not sure what is going on.

@paku:
IF you like ,publish your LV and MR skin's here ,with screenshot's and download link ,
i got also some nice ideas for a MR skin ,i will start when i'am back

paku wrote:@DreadM:If you choose to use a lighter color for the text, please make two versions. One with dark text and one with light text.

i just wan't to make one version ,so what to do with the black text ? Me i like it like it is

paku wrote:@DreadM:If you choose to use a lighter color for the text, please make two versions. One with dark text and one with light text.

i just wan't to make one version ,so what to do with the black text ? Me i like it like it is

Yes, I'm pretty sure the black text gets my vote too.
--
The gpzbc
Top

if you like to use a skin that is unreadable then it is your right to do so.

but i don't like to see things that are to give information to people be unable to have everyone read that information if it is typed there by them when they try to use the thing or shown in type to them by the thing.

but sure if you want the black font on black background that is fine its just not going to be used by more then about .000002 percent of the people in the world. cause they too can't read what is there.

remember older users need more contrast then what black on black gives? of course they would not get the skin
cause they can not read it.

now for the artist side of me.

that black skin with everything black will be great to keep the album covers shown and in the main focus of the users.
and this gives a style that not many do in way of art.
its more goth then most like.

but so will the monkeyflow script if it is used by those that can use it.

so basicly what the deal is,
Is that you make it like you want if some one else gets it then there are two that at least have the same likes. but those that don't won't get it.

even simpler way of saying it is.

Thanks RC,
but there is absolute no black Background in this Skin,
I think you have a monitor problem,maybe you have to use a monitor testing tool you suggest often in some older post's from you

MonkeyRok Skin:
http://www.mediafire.com/?1kzowyjotez
extract to 'MediaMonkey\Scripts\MonkeyRok\skins'
I only skinned the Icons I needed. I didn't need the player icons. If you do, tell me and I'll change them.
Screenshot:

These are my first skins, so please be gentle

The MonkeyRok skin took me a while because I almost had no idea, what I was doing

If you discover any mistakes, please tell me.

@DreadM:
I couldn't wait for your MR skin, so I decided to create one on my own. Can't wait to see your's