v5.0 - 2015-11-03
* Added: batch execution of presets which allows modification of two or more fields at once, with ability to create multiple batches for different tasks;
* Replaced: Tag Manipulation Presets menu with sub-menus for better organization, with ability to create new custom menus, so instead of one big menu with all presets you would get presets hierarchy on two menu levels;
* Added: Find option with the Next/Prev buttons to the Manage Presets's dialog box (improved old Export/Import dialog) which allows searching for preset that contains the specified text;
* Added: Match case and Regular expressions options for use with the mentioned Find option;
* Added: context menu to the table in the Manage Presets dialog box with some options usable in that dialog box (Copy, Select all, Print, Word Wrap, Match case, RegEx and several sorting options, e.g. Sort all presets by menu and name);
* Added: Add/Edit button to the Manage Presets dialog box;
* Added: ability to apply preset using menu, hotkey or toolbar and to open the Manage Presets dialog box while the Preset Settings dialog box is still opened (if the corresponding Modeless option is turned on in the Options dialog);
* Added: Choose RegExp Preset dialog box similar to the Manage Presets dialog for searching and selecting preset that is opening from the Preset Settings dialog box using the "..." button;
* Added: ability to specify which action would be applied (Replace all, Keep/Select matched/replaceable) when you start some preset using menu, hotkey or toolbar (until now it was only Replace all);
* Added: Keep/Select irreplaceable options;
* Added: ability to apply some preset to the currently playing file using menu, hotkey or toolbar (until now it could be applied only to the selected files);
* Added: Tune dialog box that is opening from the Preset Settings dialog for fine adjustment of preset parameters without messing with the long and complicated Find what/Replace with strings;
* Added: inverted mode when you could find something in one field and use matched string to replace data in another field (until now it was possible to replace data only in the same field that is also used to find data) (that option is experimental and maybe I will change it in the future);
* Added: test of VBScript conditions using Find what string in inverted mode;
* Improved: Description text box in Preset Settings dialog box and preset adjustment dialog boxes, which is now multi-line;
* Added: ability to enlarge Find what/Replace with text boxes with "^/_" buttons;
* Added: ability to choose what will be displayed in the info boxes below Find what/Replace with combo boxes: Old <Into> (Original), Old <From> (Replacement), New <Into> (Result), New <From> (useful with presets that could modify two presets at once);
* Added: buttons/combo boxes with several new options (Entire/Empty/Filled/Begin/End and Field/<From>/<Into>/<Str.>/< Num.>, depending of the preset settings) that are between Find what/Into, and Replace with/From combo boxes, replacing Full buttons that was next to the Regular expression check boxes;
* Replaced: Backward search direction check box with the dropdown list next to the Find Next button containing the new Find Previous command;
* Replaced: |< and >| buttons with the additional spin buttons that are next to the text box showing the currently selected track;
* Added: ability to use <If>, <Else> and <End If> tags in Find what/Replace with strings for conditional modification of presets using check boxes in the preset adjustment dialog boxes (similar to the new Magic Nodes add-on);
* Added: ability to log information about modifications of metadata when applying presets using the Event Logger add-on;
* Added/Improved: many presets, there are now 500 supplied (but don't worry, they are all logically organized into sub-menus and relatively easy to find). 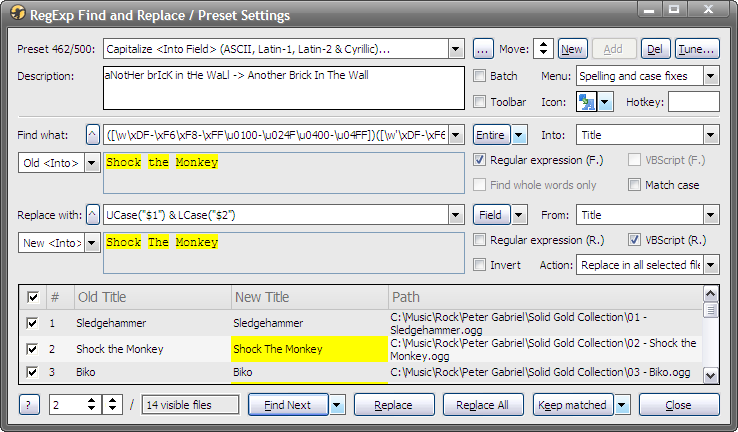 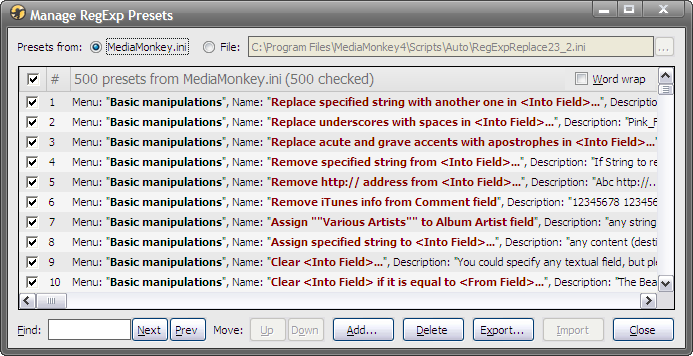 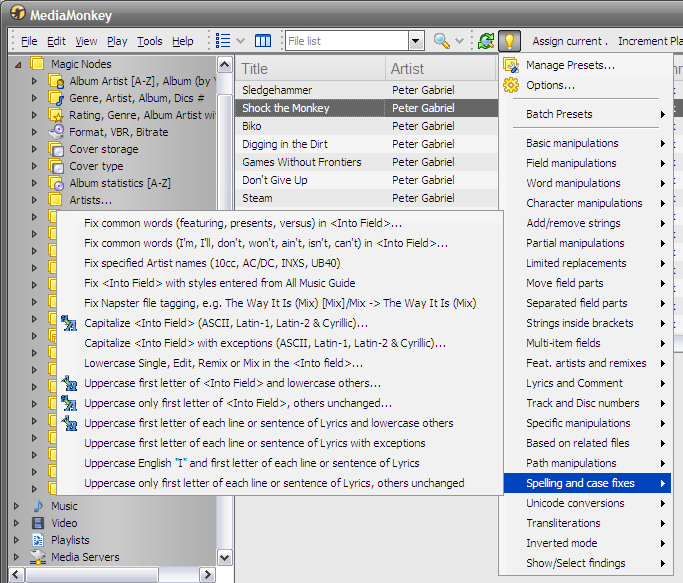 Not affiliated with MediaMonkey ... just a RABID user/lover
DTSig
Top

I really like this script but I am having an issue managing presets. I am trying set a list of presets so I don't have to go through the whole lot of them but it never saves the list I select. I have tried exporting a set and just checking the boxes but nothing I do lets me keep a custom set of presets
Top

Thank you for this awesome addon. It's been a time saver for so long.

Is there anyway to fix this? Thanks again for the addon and any help you can provide!!
Top

orbit124 wrote:I really like this script but I am having an issue managing presets. I am trying set a list of presets so I don't have to go through the whole lot of them but it never saves the list I select. I have tried exporting a set and just checking the boxes but nothing I do lets me keep a custom set of presets

Make sure to import your chosen presets from File to MediaMonkey.ini first. Then select the presets that you want to export from there.
Top

kluv wrote:The preset "Remove featuring artists or [(featuring artists]) from the end of <Into Field>", deletes titles with (Remix) along with the string it's suppose to.

Is there anyway to fix this?

The new version of the add-on has many added and updated presets regarding featuring artists and manipulations with the parts of field between specified strings (e.g. "(" and ")") with which you could specify which pair of brackets (and enclosing string) you want to remove, counting from the left or right. For example, the "Remove right-specified part of <Into Field> between (and including) specified strings..." preset: 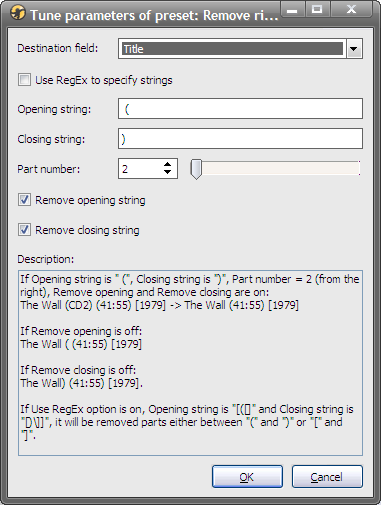 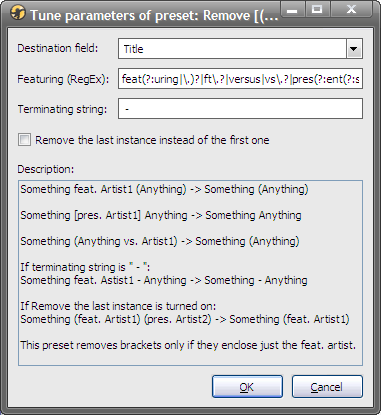 After installing version 4.4.3 I get an error 1002 Microsoft VBScript compilation error, Syntax error, with the whole code in the message box.

It seems strange that in RegExpReplace.vbs all the code is in one line, there are no paragraphs (CR,LR) but only colons.
Sync Back Ratings & Play Count, Sync stats for Android PlayerPro XML, Import music stats from Songbird XML
Recognize badly mastered music - detect clipping and compression
MMW Gold since 2009, MMA Pro since 2014.
Top

Aff wrote:After installing version 4.4.3 I get an error

For uninstalling previous version, you go to Tools > Extensions > choose RE F&R > Uninstall (right?)
I've had several extensions show up there in the past, but currently the only one that shows there is Backup 6.0.

Is there a way to get it to show up there so I can properly uninstall?
Or, will I need to do it manually (I have an idea but would like instructions on manual uninstall, if necessary).


MMFrLife wrote:Is there a way to get it to show up there so I can properly uninstall?

No dual install, but I am running portable (have been for years) and I believe REF&R has shown there before.
I believe, like you suggest, it's a bug. Or, I improperly updated MM last time.

Can I just move it out of the scripts folder location? From Scripts > Auto > remove/delete ...replace.ini, ...replace.vbs, ...Genres.ini
> then, install new > import presets backup?

If you are not sure or cautious about confirming, just let me know if it sounds ok.
Don't worry, I have all the key files and the program itself backed up.
MM user since 2003 (lifetime since 2012) "Trying to imagine life without music gives me a headache"
track properties; dir/fn mask configurations; check out ZvezdanD's scripts
MMW 4.1.18.1842b; fav scripts > RegExp Find & Replace 5.1.0; Magic Nodes 5.1.0; Advanced Duplicate Find & Fix 3.8.2;
Backup 6.0; Clear Now Playing Button 1.2
...always back it up, especially before doing anything major!!!
Win. explorer alt. for power users [free]; great file/folder renamer [used by nasa]
Top

There is no point to remove the mentioned files if you will install the new version since they will be overwritten with the files with the same names anyway. The main part of the RegExp uninstalling process is removing of the related Ini sections including the old presets. Of course, you could do that by manually editing the MediaMonkey.ini file, but I think it is simpler to install the old version again, then uninstall it with enabled option to remove the Ini settings including presets, and finally to install the new version.

Ok, thanks. I think I will make an experimantal attempt at it first (not worried since everything is backed up).

Answer me this, please:

1. I have noticed that the preset backup (.ini) that I performed is saved to/now resides in the Auto folder like the script and .ini files.
Is that where it needs to be to work for the new install, provided that the old one is removed/uninstalled?

2. The old presets file (RegExpReplace.ini) is with a file (RegExp-ID3_Genres.ini). Are these both preset files where genres are just separated out
with there own file? Is there not a need to backup the ...Genres.ini because it only contains the predefined Genre presets and no customization?
Or, is it part of the single file backup package?
MM user since 2003 (lifetime since 2012) "Trying to imagine life without music gives me a headache"
track properties; dir/fn mask configurations; check out ZvezdanD's scripts
MMW 4.1.18.1842b; fav scripts > RegExp Find & Replace 5.1.0; Magic Nodes 5.1.0; Advanced Duplicate Find & Fix 3.8.2;
Backup 6.0; Clear Now Playing Button 1.2
...always back it up, especially before doing anything major!!!
Win. explorer alt. for power users [free]; great file/folder renamer [used by nasa]
Top

Here is the excerpt from the Installation section of the first post: "The RegExpReplace.ini file is used only after the installation. During its work, the RegExp Find & Replace add-on stores presets into the MediaMonkey.ini file."

The RegExpReplace.ini and RegExp-ID3_Genres.ini files are parts of the add-on, they are unpacked during the installation to the same folder with the script file, they are not modified during its work and you don't need to backup them. You need to backup only the Ini file that you have exported using the Manage Presets dialog box (the old RegExp Export/Import dialog box). You could choose whatever folder you want when you export your presets to the Ini file.

Ok, big oversight on my part. The current version I have is 4.3. I was wanting to try 5.0. I was thinking I already had it having downloaded it from my email.
I forgot that the email was just an announcement for 5 as a beta asking for a request before sending the actual file, and a warning to be safe and use on copies
to test out.

Anyway, after rereading the email and remebering that I passed on requesting it because of the warning, I realized why I don't actually have it
saved on a drive.


ZvezdanD wrote:However, if you have the portable version I doubt that you will get the newly installed version of the add-on in the Extensions dialog box anyway.

I did, however, reinstall 4.3 and got it to show up in the extensions dialog box! Yipee! I knew I had seen it before. So, at least when I'm ready to do the new one, I can do
it properly.