Get answers about the current release of MediaMonkey for Android

MMA 2 is a big new release, that's why it's taking longer. There is no release date set for MMA 2.
Lowlander (MediaMonkey user since 2003)
Top

sorry to insist but still in desperate need for this, as i tag specific genres on my tracks that i use for DJing afterwards.

You guess how much time is lost with that
Top

Genre change not synced from device to PC

Hi, if I change the genre of a track on my device I've found that the new genre is not synced back to the PC, which is highly inconvenient.

Is this a bug or by design, and if by design, use it possible to include genre sync in a future release please?

Re: Genre change not synced from device to PC

BigPedro wrote: ↑Tue Jan 07, 2020 3:12 pm Hi, if I change the genre of a track on my device I've found that the new genre is not synced back to the PC, which is highly inconvenient.

Is this a bug or by design, and if by design, use it possible to include genre sync in a future release please?

Dude, it's what this whole thread is about, did you read?

Then your question doesn't make sense as this whole thread is about the fact its gon'a be fixed in a future release..
Top

I didn't see this thread, I started a new question, why are you getting worked up about it? Just take a deep breath and scroll past.
Top

your question is not showing as a new question but as a reply to this topic
I guess it was moved by a moderator, hence the misunderstanding,
you could have just said so to begin with.
Top

You could have just asked, anyway, we both want the same thing, let's hope a fix is forthcoming

buddy, there was no way for me to know
as for the fix, it won't likely be before version 2 so not in the close future..
Top

Metadata changed on MMA is not syncing back to MMW

Hello, I've been trying to get this working properly and after a couple months of trying I've decided to file a bug report. Tag changes to tracks are not all being sent back to MMW on synchronization. In my testing I've determined the following

S9
Synced to internal storage
Created a playlist with just a couple tracks.
Synced to phone
Modified metadata for title/artist/album/album artist/genre/rating on phone
Synced to MMW
Metadata for Artist/Album Artist/Genre failed to sync 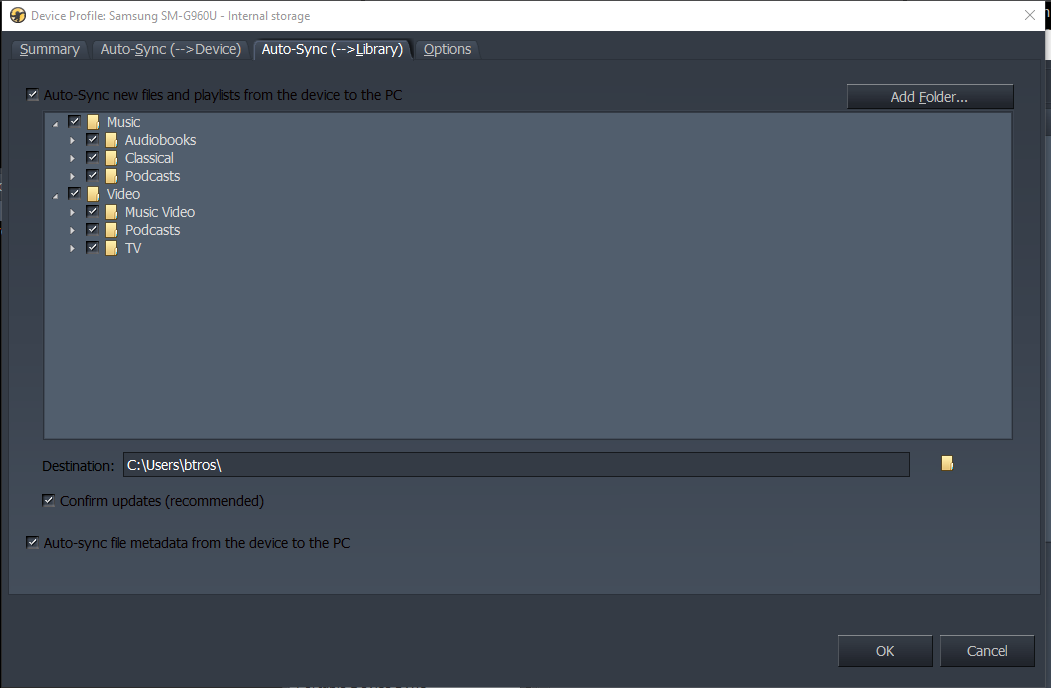 In the course of testing this, I've sent three sets of logs from the S9. I've only confirmed the bug on the S20, no further testing was done there, because I've got around 9000 songs on that SD card and wanted a clean set of logs for you to browse.

Please let me know if there's any more information I can provide. There is a bug report for a similar bug http://www.ventismedia.com/mantis/view.php?id=13548, however it's in a "resolved" state

After looking closer at that bug report, it appears that it was reclassified as a feature request added to version 2.0. I don't see an Android version 2.0 anywhere except for one forum post from 4 years ago asking when 2.0 will be available that garnered a snarky reply of "when it's ready". Without engendering the same sort of snark, is there any way you can give a ballpark on when this feature that was fixed 4 years ago might be released? There's nothing in the product that indicates that this feature isn't implemented, and the way the UI is set up suggests that those values would be updated along with the rest. Sorry if I sound a little curt myself, but I've spent the last few weeks banging my head against this issue thinking I was doing something wrong, and it turns out the product was the issue, not me.
Top

been hoping for that since 2 years here

it takes me hours, and im probably not the only person to do so..

Is it working in MMW beta version? i dont think so
Top

This is to be addressed in MMA 2.0, but there is no timeline for MMA 2.0, it really will be available when ready. However they're working hard on it, but MM5 is the current priority for release after which MMA 2.0 will be the priority.
Lowlander (MediaMonkey user since 2003)
Top
Post Reply
30 posts